Making art is just making marks, don’t overthink it. Which might be a slightly easier opinion to hold if you are the kind of artist Richard Gilbert is, a painter who can paint the autumn air around a tree, or work out how flat light hits floodwater and put it on canvas.

But he’s not wrong. And that's what The Big Draw is about.

For the last week, and in the middle of Gilbert’s own Common Ground exhibition, the Herefordshire artist has been helping hundreds of young painters, would-be artists, students and families get messy and make marks on a 40-metre long painting of the county’s landscape.

The idea behind this quite epic project was to take what Hockney did, and paint as much of Herefordshire’s horizons as was possible, from a kind of false perspective. Gilbert sketched out outlines of the landscape from Hergest Ridge to Arthur’s Cave and then everyone else grabbed a brush and put some colour on the page, adding the bits of Herefordshire they wanted to paint.

Gilbert said: “The Big Draw happens nationwide and it partly came about because so many people's response is self-deprecating: I can't draw so won't try. Hopefully if people can set that self-expectation aside and join in, they will find its just about making marks and it’s a very natural thing to do.” 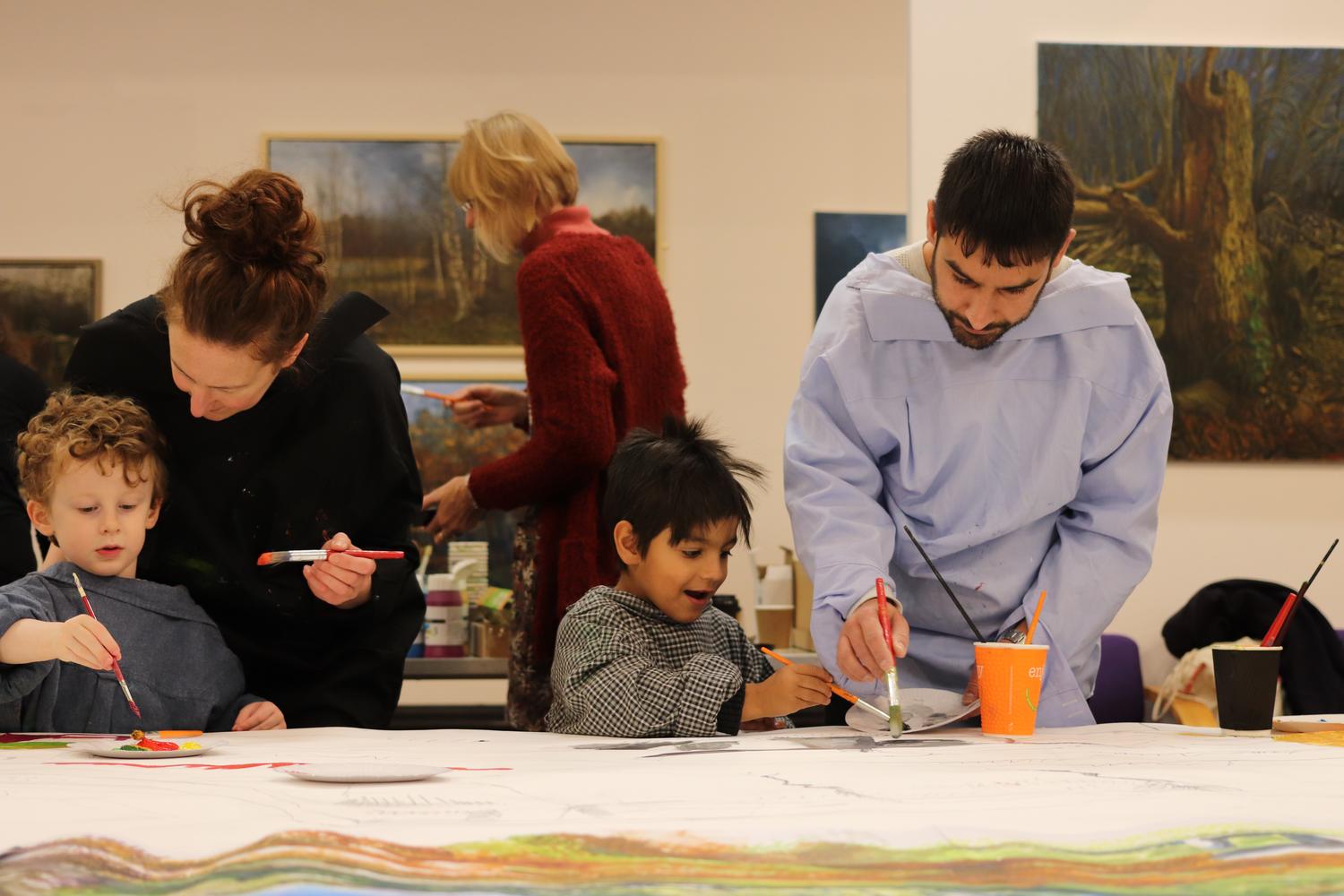 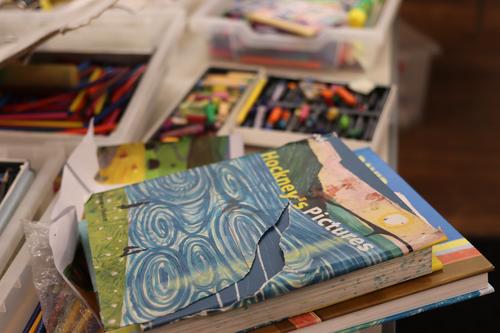 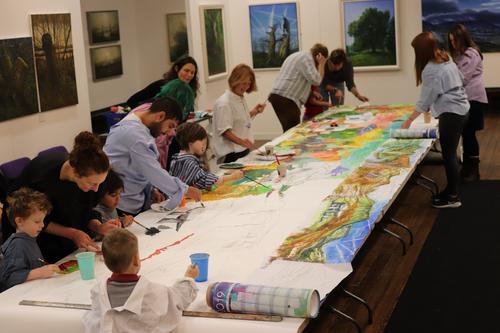 The final section of the panorama will be painted on Thursday, then displayed at a showcase event as part of Herefordshire Lates in the evening at the Hereford Library where it’ll live for the near future, hung in 360 degrees.

You can see Common Ground in the museum's exhibition space upstairs – and you really should - until November 23. The oil paintings span the county’s vistas, both natural ones and the kind of corrugated barns and occasionally-derelict farmware the dots the landscape. He also curated a series of Brain Hatton’s watercolour landscapes, retracing the famously active walker-painters steps to capture some of Hatton’s hills and trees as they are today.

He said: “I’ve had great conversations with many visitors about trees and [how they relate to] their favourite places in Herefordshire. It’s not so strange when you think that we all connect to trees, especially ancient ones. It’s all heritage. It’s in our roots, we come from forest dwellers.”

We spoke to Gilbert about the trees, The Big Draw and why his eye’s always been taken by the green and pleasant land outside his door.

What were your favourite but least-expected vistas when painting Common Grounds?

What surprised me were the last winter scenes and the black and white imagery where colour was minimal and the snow fields and green skies seen through a tracery of bare trees are something that I intend to explore more. I probably would not have come to these images if not for the Big Draw, so that is what I will take away.

What have the young painters’ reactions been to the project? Have they surprised you with how they’ve interpreted their surroundings?

The first school, Hereford Cathedral, were fantastic and launched themselves in with gusto, it was different to their normal art lesson where it’s about the individual - anything that is a collective team effort can take on an altogether different energy. What was great was that quite few came back of their own volition during half term.

The primary schools that visited were brilliant and superb value. It was disappointing not to have involvement from the colleges, but you cannot win them all. The Year Eight artists from Ledbury were exemplary in their focus and you see how hard they listened, and were really thinking about how to use the brush to get expressive effects.

When did you first pick up a paintbrush/pencil? And how important is it that events like the Big Draw let young people have a go?

I took to art at secondary school. The art room was the place that made sense, and we could play our own music, the Velvet Underground and Bob Marley.

The Big Draw offers an opportunity for anyone to make their marks, but you know, sadly, the arts have withered in many schools with advent of the eBac – and any art teacher will tell you this – numbers taking art through GCSE and A Level shrink every year, so this really is a question for the next minister for the arts or education to address.

The Big Draw partly came about because so many people's response is self-deprecating; I can't draw so won't try. Hopefully if people can set that self-expectation aside and join in, they will find its just about making marks and it’s a very natural thing to do.

How do you think Hockney would have painted Herefordshire’s horizons?

You would have to ask him, but look at his Yorkshire landscapes and you can see that having flown in from California where he spends half his year and its one season all year round, the green of England must be a complete blast, an elixir that has vitalized his late work.

How many people do you think will have painted on this project when it’s all said and done?

Certainly hundreds, we are collating the numbers. 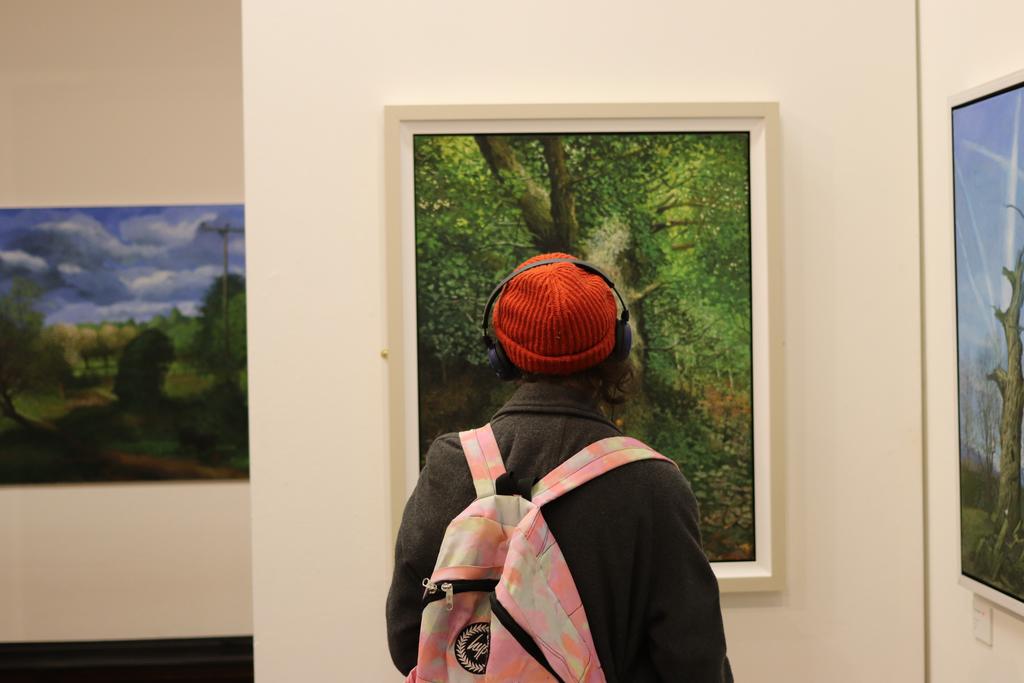 For you, as an artist, what is it about landscapes and horizons that have held your imagination for so long?

Living in Herefordshire has done that. It’s got something of everything in this extraordinary county from mountains to rivers to forests to orchards. Ask yourself when visiting an art gallery which pictures and which artists you connect with and that tells you something about yourself and what you value. And it just gets better the more you explore.

My top ten artists are all landscape artists, or set the human story in the landscape. And then we have so much great writing about nature and landscape now, Robert McFarlane and Hereford's own John Lewis-Stempel. Their books address the really important and crucial issues concerning the planet in our time that should be the primary areas that governments address.

Hatton’s paintings, and Hockney’s landscapes, and yours, all by nature are about putting both painter and the audience in a place. How important/effective is it for art and artists to reinterpret the places around them, and to frame up the world around them in a way that shows it in a new light?

Your question really is an excellent statement that explains the function of art, to reflect the world around and to express how we feel about things that mean something to you, such as trees and nature. These should be a common cause to protect for the future.

I have had great conversations with many visitors about trees and their favourite places in Herefordshire. It’s not so strange when you think that we all connect to trees, especially ancient ones. It’s all heritage. It’s in our roots, we come from forest dwellers.

Your exhibition is in part about Common Grounds. The Big Draw’s showing what can be done in a public space. What’s the case for more common grounds, in 2019?

Well the Big Draw happens nationwide every year in October so it’s only a click away to find one near you on their website. Drawing is natural activity, the first language of art and it feels like a natural activity for the hands to want to do, and you do not have to make a case for something that is good for you.

Why do you think more people, more often, of all ages, pull on a smock and paint something?

It’s been great working with all ages this week. Children are natural and love everything sticky-fingered but sadly Art has been squeezed out of the curriculum and opportunities to express themselves have fallen short, so the Big Draw has been a great opportunity for them to make art and have it on show. Also older artists love to get the apron on and they have got stuck in. At the same time, whilst we have seen many families, we have actually seen very few students and no other artists.

How can people see Common Grounds and the result of Big Draw?

The panorama will be on display in Hereford Library soon and then who knows where, we shall have to see.

Herefordshire Lates, which also features a Moveable Feast that takes in five delicious courses at five stunning heritage venues across Hereford, is being organised by Herefordshire's a Great Place. 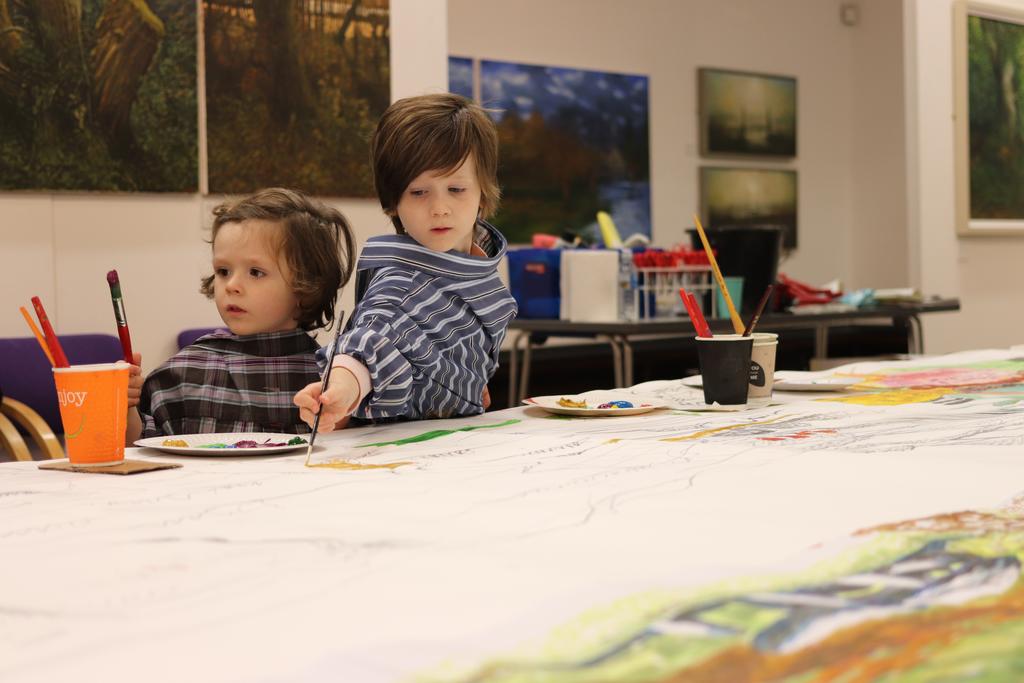 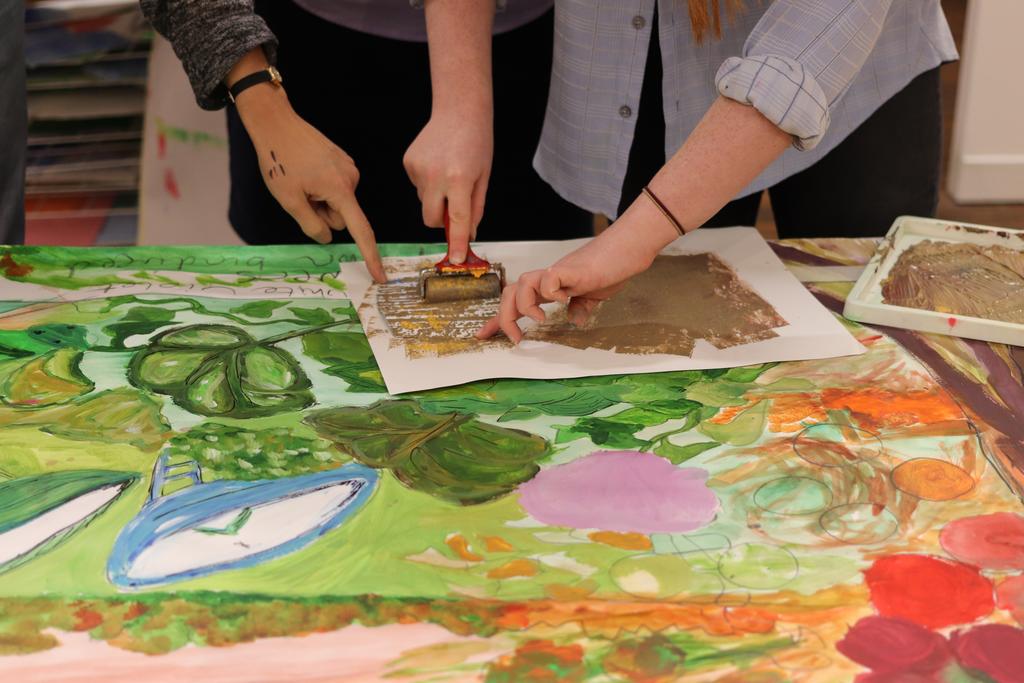